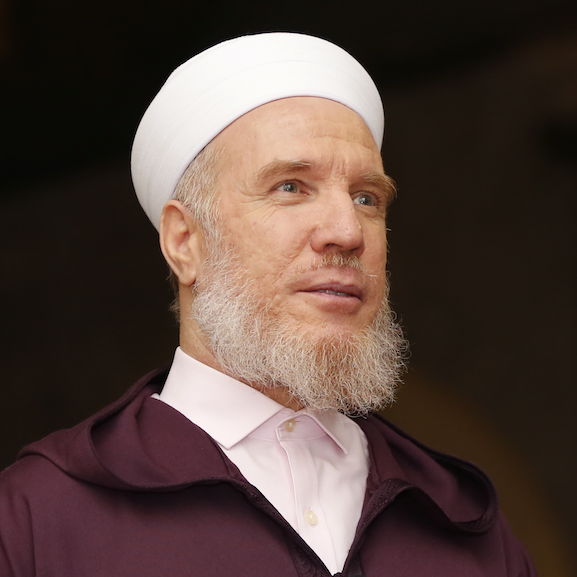 Born in Damascus, eloquent in Arabic and fluent in English, deeply rooted in the Sharia sciences, he inspires love for the Prophet ﷺ and connects to his Sunnah.

He authored “Refuting ISIS”, and the Madkhal (Introduction to Sahih al-Bukhari), establishing the authority of Imam al-Bukhari and the authenticity of his work.

He was appointed a member of the Royal Aal al-Bayt Institute of Islamic Thought in 2016. In 2022, he was ranked as one of the 37 most influential Islamic scholars. The following bio is from The Muslim500, 2022.

Shaykh Muhammad Al-Yaqoubi was born in Damascus and was trained in Islamic studies by his father, who was an Imam and instructor at the Grand Umayyad Mosque. Sheikh Al-Yaqoubi followed in his father’s footsteps teaching in the same mosque, and becoming a world renowned Islamic scholar of theology, jurisprudence, and Hadith. He is widely-recognised as one of the reliable authorities for the issuing of fatwas in Islam.

He was one of the first scholars to speak against DA’ISH, denouncing its atrocities and showing that its actions are un-Islamic. His book Refuting ISIS (now in eight languages), has become an essential reading, providing theological arguments against the extremists and calling on the mainstream, traditional followers to combat them. His criticism of the Syrian government’s response to protests made his stay in Syria untenable, and so he had to flee the country, eventually seeking refuge in Morocco where he is still based.

As a teacher, he has trained several hundred imams and teachers who work in the Arab World, the West, in the Far East and South Africa. As a spiritual guide, he focuses on the spiritual well-being of Muslims and gives personal spiritual instruction to his disciples, of which he has a significant following in Europe and the USA. He is a charismatic public speaker in both Arabic and English (he also speaks Swedish) and one of the most powerful voices of Islam making a huge positive impact via his public talks, writings and numerous media appearances worldwide. His public teaching includes readings of the entire collection of hadith in Sahih Bukhari.